The Art of Wearing a Raincoat 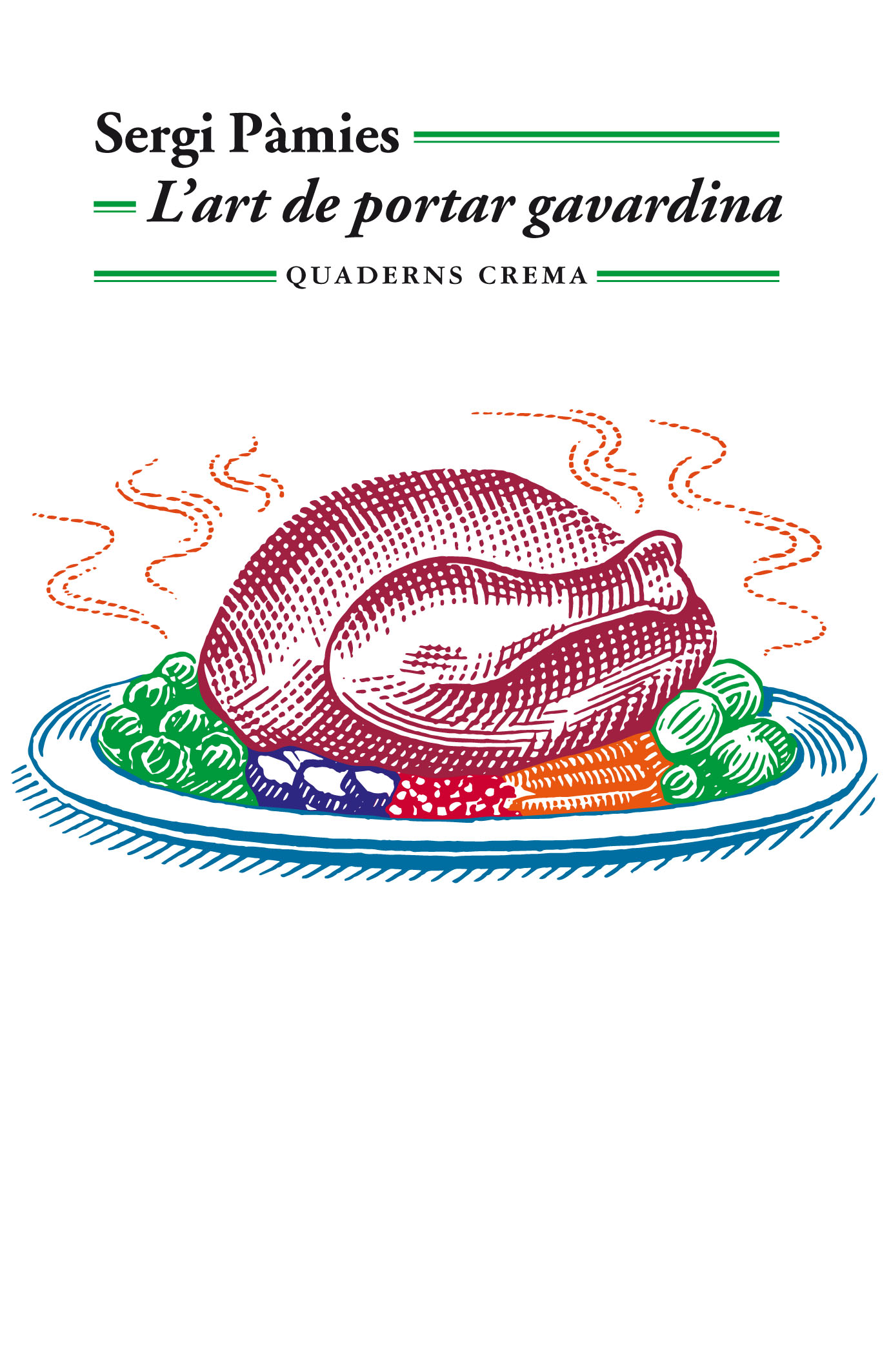 The Art of Wearing a Raincoat concentrates in one work memory, emotion and the pleasure of storytelling. Whether imagined or actually lived, the thirteen stories in this collection reveal a capacity for observation that confirms Sergi Pàmies as the artisan of an ever more purified style in which emotions and details are the protagonists. From his own infancy to his parents’ old age, from the romanticism of disappointment to the sense of panic at being at the height of his children’s expectations, from the individual perplexity of adolescence to the collective scars of the 21st century, this book combines reflection, irony, melancholy, causticity and lucidity, at the same time as it finds in the fascination of the absurd and the capability to surprise oneself the most effective antidotes against absence, failure and the other embarrassments of maturity.

«His best book. He could easily have given it the title: The Great Book by Sergi Pàmies».
Jordi Basté

«Sergi Pàmies finally frees himself from his chains in order to free us, too, from the cliches of an epoch and its myths».
Josep Cuní, El País

«It is impossible to read his works and not find in them a character who resembles us, stuck in a situation that looks familiar. Mediterranean irony and pessimism link up his invented world, stories that spring to life out of an intimate, secret reality that lays itself out in sentences of great communicative effectiveness».
Xavier Mas, La Vanguardia

«It is a book that can make you cry and laugh at the same time, and that goes to show that its author is enjoying one of the most creative moments in his career».
Jordi Nopca, Catalunya Ràdio – L’ofici de viure

«This book invites a read that contains complicity; it is written in that minor key that turns literature into a form of friendship».
Nadal Suau, El Cultural

«Pàmies’s stories, perfect as raincoats or suits made to measure, mix fiction and autobiography, because the latter cannot express itself without the mechanisms of the former. The fiction would be a cadaver without glitter, were it not for the autobiography».
Miqui Otero, El Periódico

«Both in literature and in life, Sergi Pàmies creates a trajectory of impeccably elegant honesty».
Imma Monsó, La Vanguardia

«Pàmies goes in for impeccable scrutiny, with refined expressive and psychological nuances. In the pages of The Art of Wearing a Raincoat, many readers will find the shiver and the vertigo of the joy of reading».
Ponç Puigdevall, El País

«Baroque sadness, in the sense that Baroque can be a play of opposites, nuances and contradictions. Readers will find themselves trapped in an emotional mental labyrinth».
Julià Guillamón, La Vanguardia

«Pàmies’ narrative skill is characterised by his ability to synthesise with great precision and by his moral clarity. Even though his gaze is full of compassion, the way he expresses it has a surgical coldness».
Vicenç Pagès Jordà, El Periódico

«His capacity for observation, his obsession with details, his eagerness to find the precise word, the extreme demands which Pàmies applies to everything he does… The Art of Wearing a Raincoat is a beautiful, memorable work».
Albert Om, Ara

«Pàmies’s most consanguineous book, in which he speaks of the people he loves while going naked under his raincoat».
Màrius Serra, El Matí de Catalunya Ràdio

«With talent and efficiency, Sergi Pàmies has entered into a disturbing territory, guided by disquiet, the emotive element, fits of melancholy and the awareness of loneliness. A devastating incursion into the abysses of maturity».
El País

«What impresses most in Pàmies’s stories is his ability to observe and, above all, to express himself. These place him on the frontiers of poetry».
El Periódico

«The more brutally autobiographical Pàmies is, the more what we read is fiction».
Enrique Vila-Matas, El País

«Sergi Pàmies invents a genre of his own, just right to fulfil his literary needs. It is new, hybrid and, above all, literarily useful and brilliant».
Vicenç Villatoro, Revista de Catalunya

«Sergi Pàmies goes back to the art of narrative brevity with a breath of poetry disconnected from the pretension of being thus».
Màrius Serra, La Vanguardia

«The Art of Wearing a Raincoat is a glorious creation, the author of which strips himself metaphorically and displays his entrails to the reader».
Ramón de España, El Periódico

«Frankly, if what you want is a splendid piece on the relationships between parents and son, and plenty more besides, read The Art of Wearing a Raincoat. Hard. Deeply moving».
Tomàs Delclós, El País

«Pàmies is honest and profound, but he never abandons lightness and irony, to which he adds a great capability for observation and a particular talent for tenderness».
Patricio Pron, Letras Libres

«Sergi Pàmies does not give it to his readers ready chewed. On the contrary, he activates them, abandons them in the place where they deserve to be abandoned: close to the centres of revelation, which are deliberately plural and clearly uncertain. That is why, in these stories, what is not made explicit, but is there, is most important. Pàmies’s collections of stories represent the peak of contemporary short narrative».
Lluís Muntada, L’avenç

«Sergi Pàmies is a genius who disguises himself in order to appear not to be one. His observation of reality is a doctoral thesis on the everyday. Like Clark Kent, he has taken off his raincoat in order to show us the strength of his human and literary personality».
Jaume Vidal, El Punt Avui

«A book of innovation and narrative delight. A book that is simple but precious».
Ràdio Estel

«These stories create suspense, fear, because the discourse of their dry phraseology is as personal as it is anthropological and because what matters most in each of them is used, observed and analysed with a surgical coldness that, with the best of intentions, cuts with a scalpel into his own beloved flesh».
Ignacio Vidal-Folch, Crónica Global

«In this collection, Pàmies is different. He has added an element that previously was absent: tenderness, sensibility. I love this book. It slips along between ironies and happily fugitive tremors».
Isabel Clara Simó, El Punt Avui

«It is a very crude book, full of characters who have been defeated. More than sceptical, it is bitter, extremely bitter».
Jordi Llavina, Ara

«The notion of the short story in this collection comes close to the chronicle, as if it were an article splashed with doses of irony and reflections on the art of narration itself. Sergi Pàmies manages to portray sadness in the lines of a self-portrait in The Art of Wearing a Raincoat».
Vicenç Llorca, Serra d’Or

«Sergi Pàmies’s stories awaken our hidden psychologist. We read the tales in the ironical spirit of people who understand, because they have been made to do so, the huge distance that lies between reality and desire».
Andreu Loncà, Segre

«A persevering artisan of the development of his own style, this is a Pàmies who is lucid, ironical and reflexive».
El 3 de Vuit

«His gaze divides up into the roles life has given him to live: father, writer, citizen of turbulent times. His lines fuse reality and fiction. A perfect combination of reflection, irony and lucidity».
Matías Crowder, Diari de Girona

«Pàmies is always clear and concise. He does not beat about the bush with fancy trimmings. He is lucid, and he always demands of his readers that they actively play their part».
Isabel Olesti, Diari de Tarragona

«A journey between the present and the past that turns reality into the honest stage for an uncorrupted inner view».
Regió7

«All of it is fiction, of course, but it is also clear that this is a book that Sergi Pàmies needed to write in order to close off intimate matters. Here is where the writer translates himself. A true master».
Juan Marqués, El Mundo -La Esfera de Papel

«A splendid book. Perhaps the best one he has published in the past few years».
Borja Bagunyà, Serra d’Or

«In his latest book, The Art of Wearing a Raincoat, he talks a lot about his parents, offering us a panoramic view of his most intimate self, and that of his family, in thirteen masterly chapters. They are, supposedly, short stories, but as a collection they could be anything you might wish to call them».
TimeOut

«When reading Sergi Pàmies’s latest book, it is advisable to have a ball-point handy – to mark or annotate the many sentences that are extraordinary – and also, maybe for those readers who have more than the usual amount of sensibility – a packet of paper handkerchiefs».
Jordi Nopca, Llegim.ara

«Without sentimentalism, but with a distant and evocative tenderness, Pàmies opens up for us a treasure trove of reflections, observations, impressions and apprehensions regarding a 21st century that is well on its way to beyond the absurd. Pàmies gives sense to the emotional non-adjustment of a century that needs his stories more than ever. You must read them!».
Carlos Sala, La Razón

“Sergi Pàmies is one of those writers who master to perfection the realistic short story».
A.C., Heraldo de Aragón

Read The Art of Wearing a Raincoat, and you will emerge fortified by the struggle against melancholy and sadness».
Santiago J. Navarro, Diario de Noticias

“A mature and existentialist book, not lacking in tenderness, parody, games with masks and the need to verbalise the hope that can be hinted at but does not dare to appear».

Discover other books from Sergi Pàmies